Fritz grew up in a very traditional Catholic Italian-American house outside of Pittsburgh, PA with several generations in the same house.  He served as an altar server and, many thought, would become a priest. Fritz enlisted in the United States Army out of high school. His leadership abilities led to his rapid rise through the ranks until he received an active duty ROTC scholarship. He w 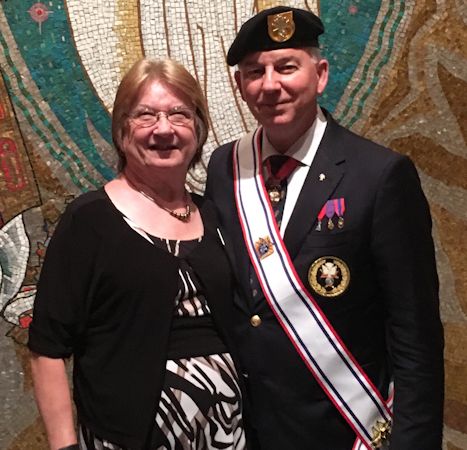 as commissioned an officer in the Army, serving in various assignments of increasing responsibility, and went on to serve on active duty for nearly thirty years. During his service he commanded units in Italy, Iraq, Ft. Bragg, and Belgium, commanding at every rank from 1LT through LTC.  He led formations during several crises and hostilities around the world, including: Operation Just Cause, Hurricane Hugo disaster relief, Operation Desert Shield / Desert Storm, Somalia, NATO operations in Bosnia, and Operations Iraqi Freedom and Enduring Freedom in Afghanistan.  Fritz continued his leadership role as a senior government executive at the National Security Agency until his retirement in 2019.  Fritz has an undergraduate degree in Finance, a graduate degree in Human Relations, and an MBA.

Fritz’s life story isn’t just about success at work. He married the love of his life, Eleanor Pienkowski, nearly forty-four years ago. Together they have traveled around the world and raised two fine daughters.  One is a Lieutenant Colonel in the US Army where she currently serves at the Pentagon. She and Fritz were twice deployed to Iraq at the same time, but not at the same place, defending our Freedom and way of life. The youngest is a successful marketing and advertising specialist at Baltimore Gas and Electric (BGE).

From his earliest years, Fritz has always been heavily involved in Church and parish activities, wherever he has lived. He has been a sacristan, parish council member, CCD teacher, and RCIA coordinator. He currently serves as a lector, lay Extraordinary minister, and sacristan in his home parish of St. Philip Neri in Linthicum, MD. He is also an officer in the Veterans of Foreign Wars Post 160 where he is a Life Member. He is a member of several other military fraternal organizations.

Fritz is a very active member of the Knights of Columbus. He has served in various positions at the Council level.  He is a Past Grand Knight of St. Philip Neri Council 14612 which achieved Double Star Council during his tenure. While deployed in Iraq and Afghanistan, he actively served the Knights of Columbus in the Round Tables in Baghdad and Bagram, where he was the first degree team captain and led several functions which raised supplies for local orphanages and schools. He served two years as District Deputy 17 in the Maryland jurisdiction. He is active on all the Degree teams.

Fritz’s real passion though is the Fourth Degree. He is a Past Faithful Navigator of Pope Saint Paul VI Assembly 2367 in Pasadena, MD.  He was District Marshal in the Maryland District from 2011-2018 and Calvert Province Marshal 2014-2018 under two VSMs.  He has been a member of the Patriotic Degree Team since 2009.  He was a member of the Maryland District Color Corps Team which competed at the Provincial Color Corps competitions, winning twice. Fritz has led projects to deliver necessity items and goodies to deployed service members, collected funds to send Wounded Warriors to Lourdes pilgrimage, raised funds for Fisher House, and coordinated the delivery of lap blankets, in conjunction with the Maryland State Wheelchair Program to veteran’s medical centers in Maryland and Washington DC.  He is active at the Provincial level, as well. He has arranged Provincial events such as wreath layings at Arlington National Cemetery, Columbus Day activities in Washington, DC, and participated in numerous events at the Baltimore and Washington Basilicas and Exemplifications throughout the Province.  He has been an active marshal, color corpsman, and assistant to Chuck Gallina at every Supreme Convention since 2009.  He was lead marshal at two Icon Presentation Masses at two different Supreme Conventions.

Fritz’ life and career have been about service and leadership to GOD, Family, and Country. He has demonstrated leadership throughout his life and is highly qualified to be the next Vice Supreme Master of the Calvert Province.